The Society of Competitive Intelligence Professionals defines competitive intelligence as: The legal and ethical collection and analysis of information regarding the capabilities, vulnerabilities, and intentions of a business competitor.

Here are 8 inexpensive ways you can gather competitive intelligence for your B2B marketing:

END_OF_DOCUMENT_TOKEN_TO_BE_REPLACED

A 2014 study by Global Intelligence Alliance (now M-Brain), Market Intelligence Trends 2020, reported that 42% of respondents said competitors will be the most important area of focus for market intelligence with regards to the business environment in 2020.

Here are 8 ways B2B marketers should be using competitive intelligence:

END_OF_DOCUMENT_TOKEN_TO_BE_REPLACED

I recently returned from a trip to Italy (I highly recommend visiting Tuscany if you haven’t already!) that included the “required” visit to the Tower of Pisa. Our return flight left from Pisa, so it made sense to visit the tower. Though to be honest, I wasn’t very excited about it. I prefer seeing and experiencing less touristy and off-the-beaten-path places when I vacation. In spite of my lackluster expectations, I came away a fan of Pisa and its leaning tower. As I analyzed why this was it struck me this centuries old tower illustrates an important lesson for the modern B2B marketer – the importance of a differentiation strategy.

Differentiate your product or service

Every marketing student will recall Michael Porter’s differentiation strategy in which a firm seeks competitive advantage by offering something unique. This unique offering must be something customers value and see as different from or better than the competition. Using this marketing strategy a firm can command higher prices that drive revenue growth and profits.

OK, so you may be thinking the Tower of Pisa is unique because it leans, that’s why they call it the Leaning Tower of Pisa after all. However, it’s not the only tower that leans. In fact, when I search for “leaning tower”, Google returns 2,680,000 results! And they aren’t all for Pisa’s leaning tower. According to Wikipedia, several towers lean even more than Pisa’s. For instance, one 15th century tower in Germany leans due to a similarly bad foundation. And two towers, one in Abu Dhabi and another in New Zealand, have designs to make them lean on purpose.

The Leaning Tower of Pisa uses a differentiation strategy

The tower is part of a beautiful white marble cathedral complex called the Field of Miracles that includes an impressive cathedral, baptistery, 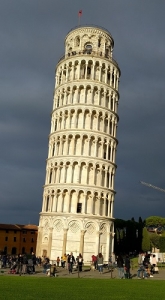 and cemetery. The leaning tower was the campanile, or bell tower, for the cathedral. The tower’s intricate white marble carvings gleam in the sun creating a stunning sight. During World War II the Germans used the tower as an observation post. However, the U.S. soldier sent to confirm the Germans presence was so impressed with the beauty of the cathedral and its bell tower that he saved it from destruction by the Allies.

The history of the tower is especially engaging because it began leaning almost immediately. During further construction and in more recent times there were several attempts to correct the lean. Early on during construction of the second floor in 1178, there was a noticeable tilt. So of course word of its leaning stance certainly spread from the outset. Then it sat for a hundred years before adding a few more floors. This even included extra height on one side to try to compensate for the lean. Finally in the mid 1300’s they added the top floor and bell-chamber, again at slight angles to counter the lean. Today if you succeeded in straightening the base of the tower, it would still lean!

Several times engineers attempted to reduce the lean or keep it from falling over. However, the Italian government realized they needed to retained some lean because of the tower’s vital role in Pisa’s tourist industry. The tower is as one of the 7 Wonders of the Medieval World, putting it in a very exclusive class. And in 1987 the entire Field of Miracles was named a UNESCO World Heritage Site further solidifying the tower’s cultural and physical significance to tourists worldwide. Even though I’d seen a million pictures, seeing it firsthand made me realize how unique and special it really is – and how much it leans. Over two days I walked past it many times and each time amazed it hadn’t fallen over yet!